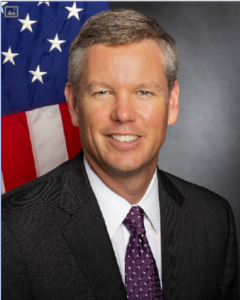 Christopher T. Hanson has been designated by U.S. President Joe Biden as the Nuclear Regulatory Commission’s 18th Chairman, effective immediately. Hanson replaces Kristine L. Svinicki, who departed the agency on Jan. 20, 2021, after serving as Chairman since 2017.

“I am honored to have been selected by President Biden to serve as the next NRC Chairman and to lead the talented women and men who oversee the licensing and regulation of our nation’s civilian use of radioactive materials,” said Hanson. “I remain committed to ensuring that we continue to work collaboratively under our authorities established by Congress to assure the public adequate protection of health and safety in carrying out our regulatory responsibilities.”

Hanson extended his gratitude to Svinicki for her service as an NRC Commissioner and Chairman, an esteemed career that began at the NRC in 2007. She is the longest serving member of the Commission in the agency’s history.

“I look forward to building on Chairman Svinicki’s many accomplishments as the Commission takes on new challenges and faces new opportunities as nuclear energy technologies continue to evolve and uses of nuclear materials expand in the future,” said Hanson.

The NRC is comprised of five Commissioners, one of whom is designated by the President as Chairman. The Commission was established to be a collegial body that formulates policies, develops regulations, issues orders to licensees and adjudicates legal matters. The Commissioners serve five-year terms, with one term expiring every year on June 30. No more than three Commissioners may be of the same political party.
Hanson was sworn in as a Commissioner of the NRC on June 8, 2020. He has more than two decades of government and private-sector experience in the field of nuclear energy. Prior to joining the NRC, he served as a staff member on the Senate Appropriations Committee, where he oversaw civilian and national security nuclear programs.

nuclear and environmental cleanup programs, and managed the department’s relationship with Congressional Appropriations committees.
Prior to joining DOE, he served as a consultant at Booz Allen Hamilton, where he led multiple engagements for government and industry in the energy sector.
Hanson earned master’s degrees from Yale Divinity School and Yale School of Forestry and Environmental Studies, where he focused on ethics and natural resource economics. He earned a Bachelor of Arts degree in Religious Studies from Valparaiso University in Valparaiso, Ind.

Before working in the Senate, Hanson served as a senior advisor in the Department of Energy’s Office of Nuclear Energy. He also served in the Office of the Chief Financial Officer, where he oversaw